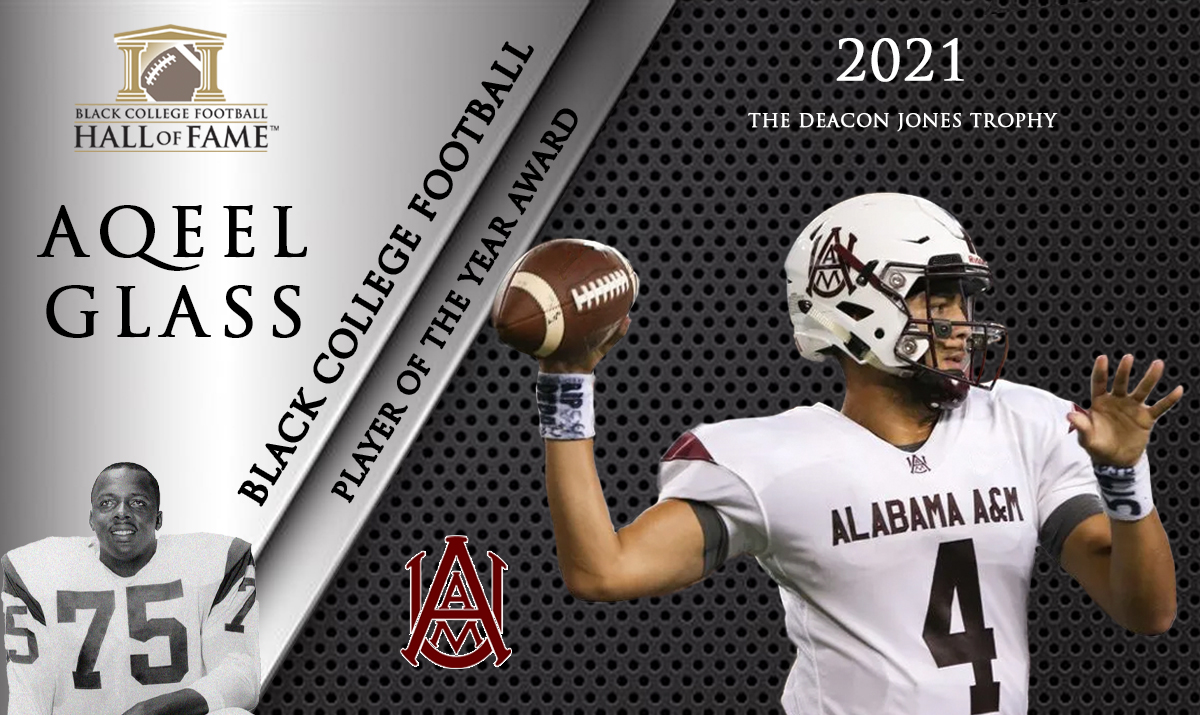 Black College Football Hall of Fame Trustees James "Shack" Harris and Doug Williams made the surprise announcement during HBCU Legacy Bowl Week (www.HBCULegacyBowl.com) in New Orleans at an all-players meeting. Glass will be representing Team Robinson during the game this Saturday, which will be broadcast live on NFL Network (3:00pm CST). The Award recognizes the most outstanding football player from a that embodies the rich tradition of athletic excellence and integrity associated with HBCUs.

Glass dominated the Fall 2021 season with 3,568 passing yards, 36 touchdowns and averaged 356.8 yards per game. His 160.8 passing efficiency over the course of 10 games led all HBCU football. He ranked in the Top-10 nationally in nine different NCAA statistical categories.

Glass ended the season ranked fifth in the FCS in passing yards per game and yards per attempt (8.62), sixth in passing touchdowns, passing yards and passing efficiency, seventh in total points responsible for (226) and total offense (348.3), and eighth in completions per game (25.9).

His incredible season included five games of at least 400 passing yards, two of which broke his own program record with 446 yards and four touchdowns, and 462 yards with five scores. He also added two more outings of over 300 yards passing and four TDs in each.

“Aqeel had a phenomenal season under the center for the Bulldogs. He is a great representation of the talented players participating in Black College Football,” said James Harris. “We wish him well in the next chapter of his football career.”

The Player of the Year was voted on by a five-member Selection Committee, which is composed of Black College Football Hall of Fame Co-Founders James “Shack” Harris and Doug Williams, Power News Radio Network's Ty Miller, and College Football on ESPN​ Analysts Tiffany Greene and Jay Walker.

Glass is a two-time recipient of the Deacon Jones Trophy (Spring 2021 and Fall 2021). The inaugural winner was current Chicago Bears​ running back Tarik Cohen (North Carolina A&T State University​) in 2016, and the winner in 2017 and 2018 was quarterback Amir Hall of Bowie State University​. Tennessee State and current Atlanta Falcons WR Chris Rowland was the recipient in 2019.