ATLANTA (February 7, 2018) - Arizona Cardinals Safety Antoine Bethea has been selected as the inaugural recipient of the Black College Football Pro Player of the Year Award, presented by the NFLPA. It will be awarded annually to the most outstanding professional football player from a Historically Black College and University.

The 5-foot-11, 206-pound Bethea attended Howard University, from the Mid-Eastern Athletic Conference, and was drafted by the Indianapolis Colts in 2006. In 12 NFL seasons, he has been selected for the Pro Bowl three times and won Super Bowl XLI as a member of the Colts.

Bethea spent his first eight years in Indianapolis, then three in San Francisco, before signing a three-year contract with Arizona in 2017. In his first year with the Cardinals, Bethea had a career-high five interceptions to go along with 57 tackles.

“This award was established to help showcase the immense talent of our current Black College Football players at the highest level,” said James “Shack” Harris, BCFHOF Co-Founder and 2012 inductee.

“Today, there are about 30 players from Historically Black Colleges and Universities on active NFL rosters,” said DeMaurice Smith, NFLPA Executive Director. “Some of the best players in NFL history are from HBCUs, and it’s exciting to honor today’s stars.”

“On behalf of the Black College Football Hall of Fame Trustees and Selection Committee, we congratulate Antoine on this historic accomplishment,” said Doug Williams, BCFHOF Co-Founder and 2011 Inductee. “Antoine is a great role model and inspiration for our youth across the country.” 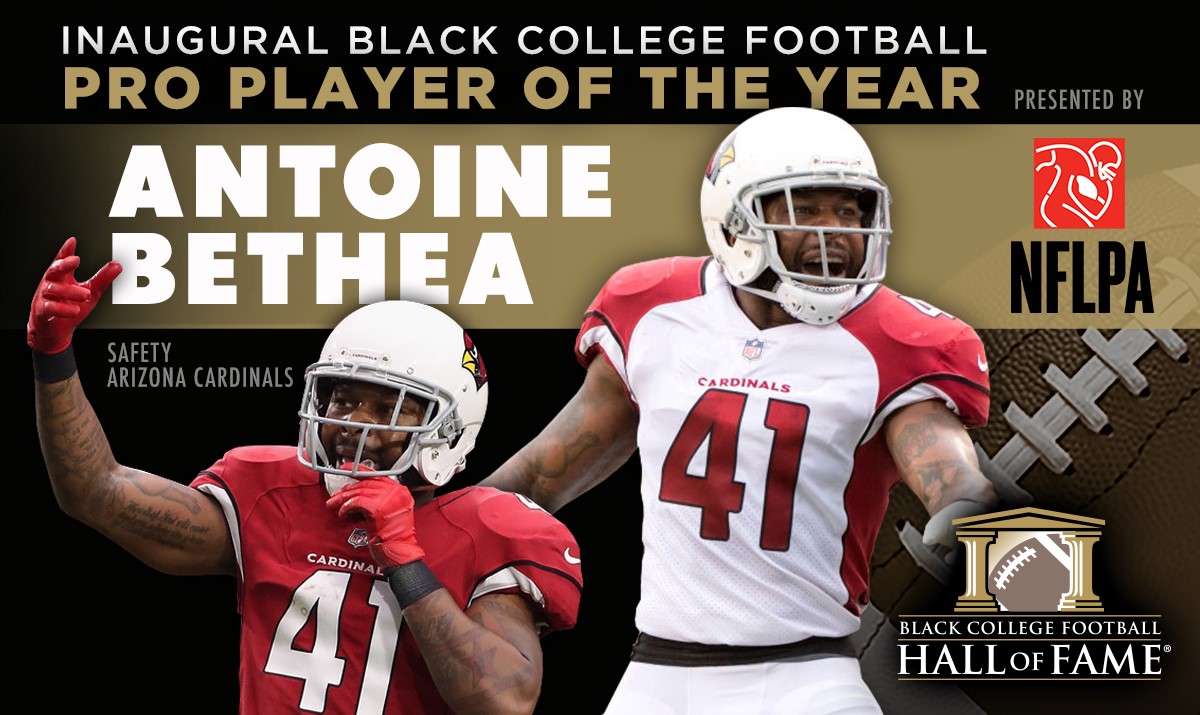 "We, The National Football League Players Association … Pay homage to our predecessors for their courage, sacrifice, and vision; … Pledge to preserve and enhance the democratic involvement of our members; … Confirm our willingness to do whatever is necessary for the betterment of our membership — To preserve our gains and achieve those goals not yet attained."

The Black College Football Hall of Fame was established in October of 2009 by African-American pioneers and quarterbacks, Pro Bowl MVP James “Shack” Harris and Super Bowl MVP Doug Williams to preserve the history and honor the greatest football players, coaches and contributors from Historically Black Colleges and Universities (HBCUs). There have been 70 Inductees since inception, including Mel Blount, James Harris, Willie Lanier, Art Shell and Doug Williams, who serve as Trustees.