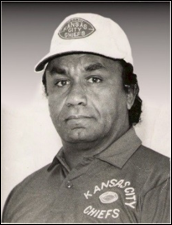 NFL Scout … Texas Southern University … Pro football's first black full-time scout … Wells' success was a catalyst for the older league to try to get up to speed in signing talented black players from small colleges, including Historically Black Colleges and Universities as the AFL had done from its inception … No less than eight of Wells' recruits made All-AFL during their pro careers … Served as adviser and confidant to Muhammad Ali … Born in 1924 … Died September 12, 2005.