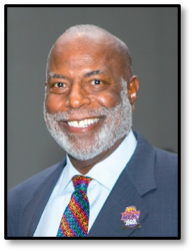 Commissioner … Mid-Eastern Athletic Conference (2002-Present) … Hampton University Athletic Director (1990-2002) … As Director of Athletics at Hampton University, was awarded the National Association of Collegiate Directors of Athletics (NACDA) Athletics Director-of-the-Year Award for the Southeast Region in 2002 … Under his leadership, Hampton won 17 CIAA Division II championships between 1990 and 1995 and 11 MEAC championships between 1996 and 2002 ... As MEAC commissioner, negotiated a multi-million dollar TV contract with ESPN and NIKE for the MEAC-member institutions … Instrumental in the creation of the Celebration Bowl.